Ogun State Governor, Prince Dapo Abiodun on Monday sworn-in Chairman of Odeda local government, Alhaja Folasade Adeyemo-Soyinka along 19 others and their deputies, with a call on them to see their new positions as a call to service to further take dividend of democracy to the people at the grassroots. 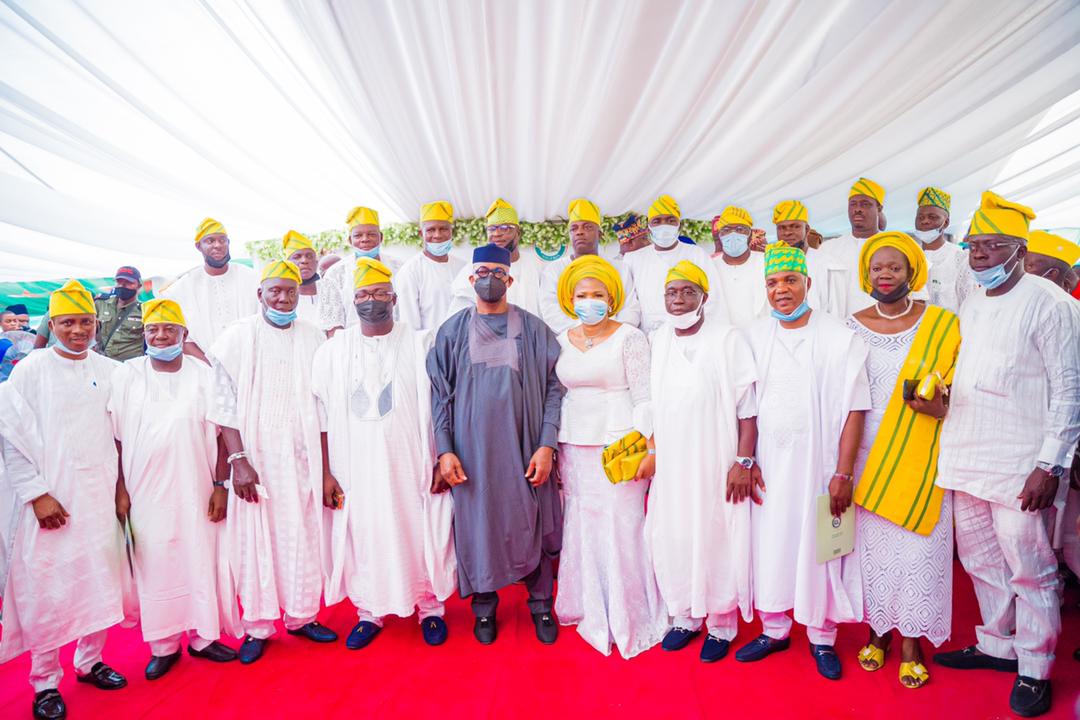 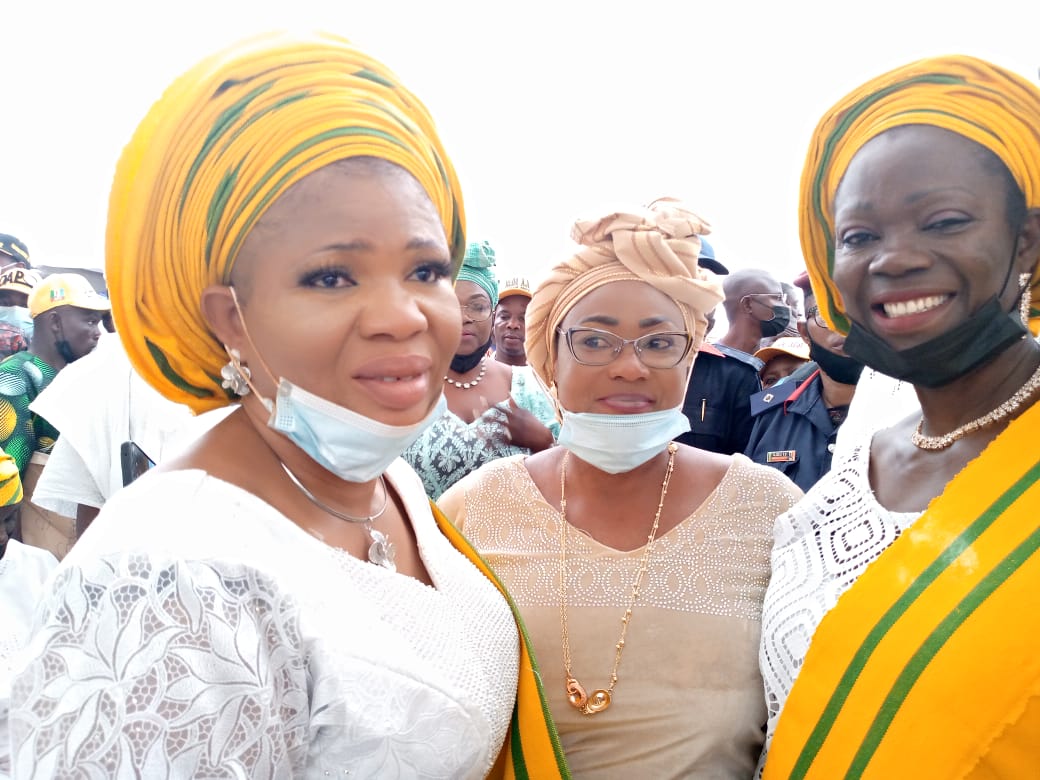 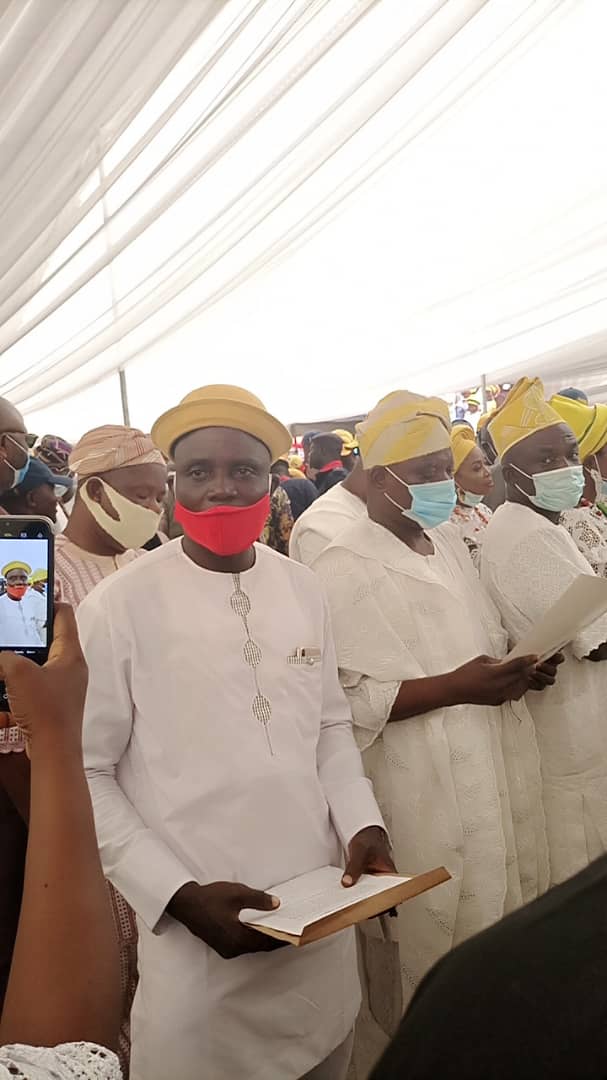 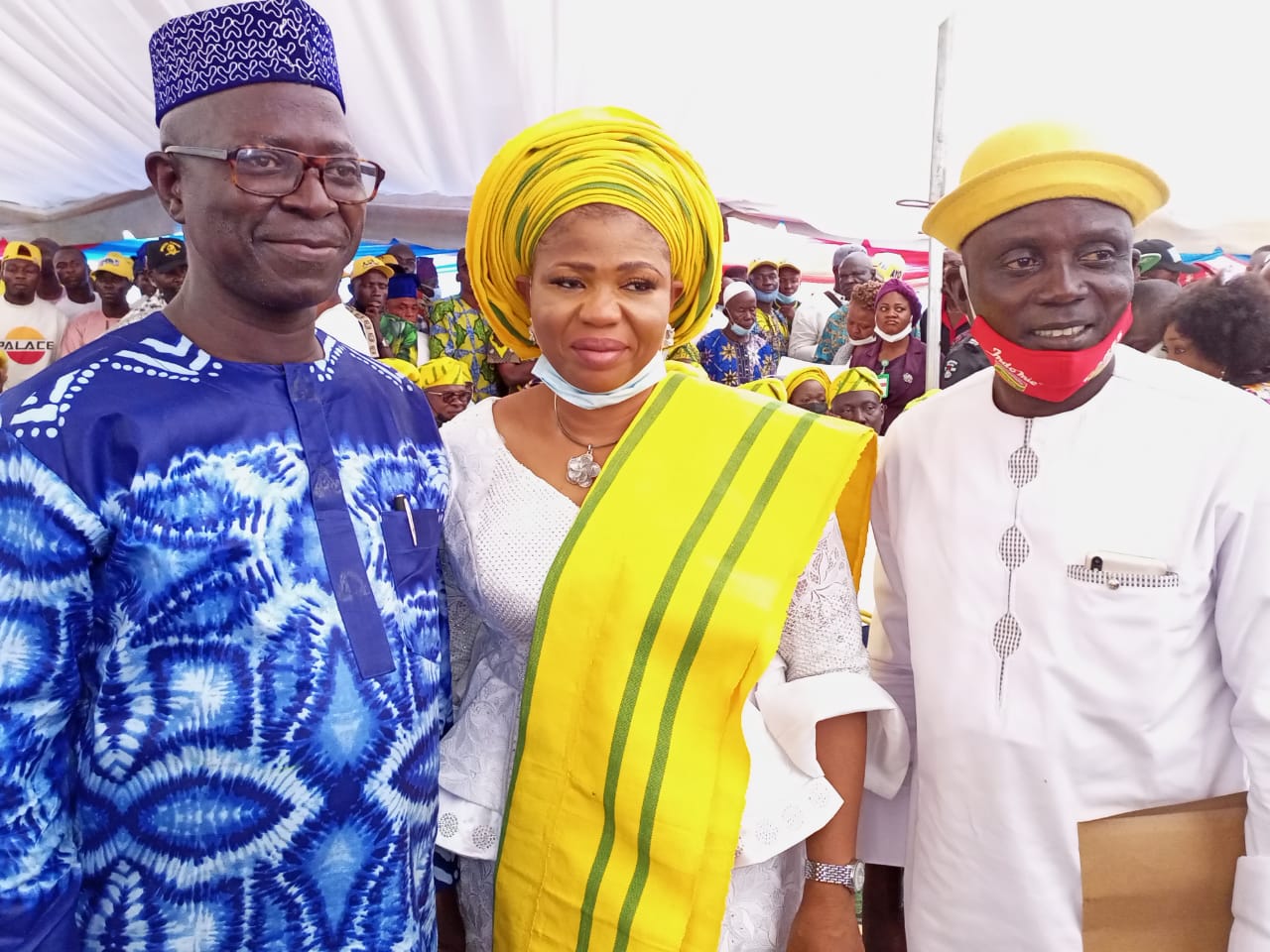 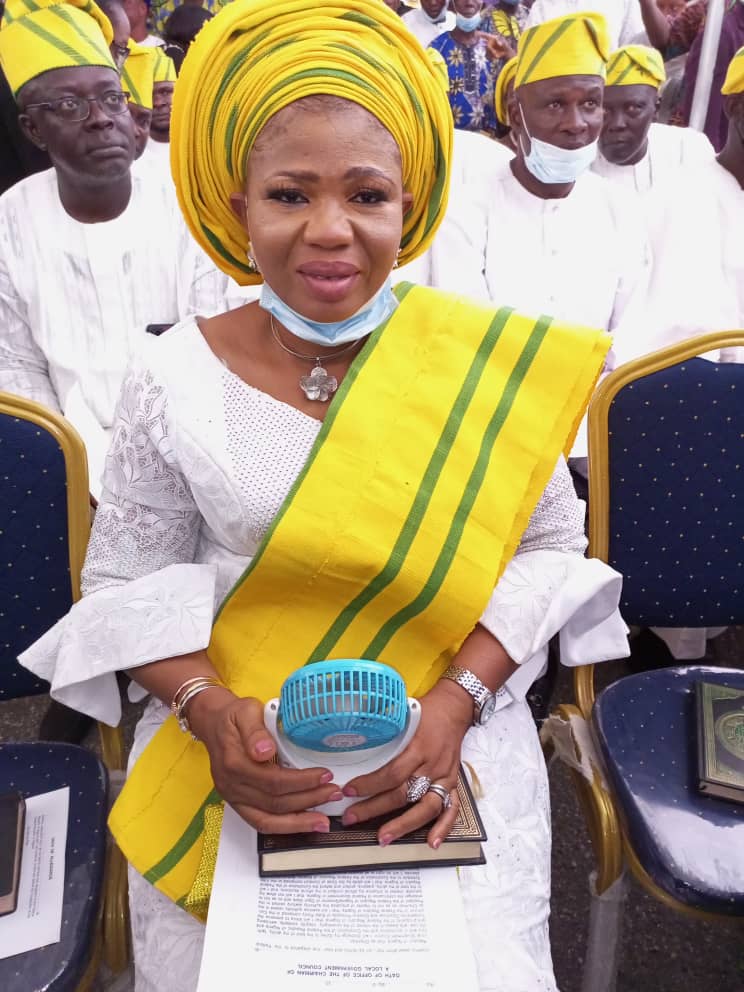 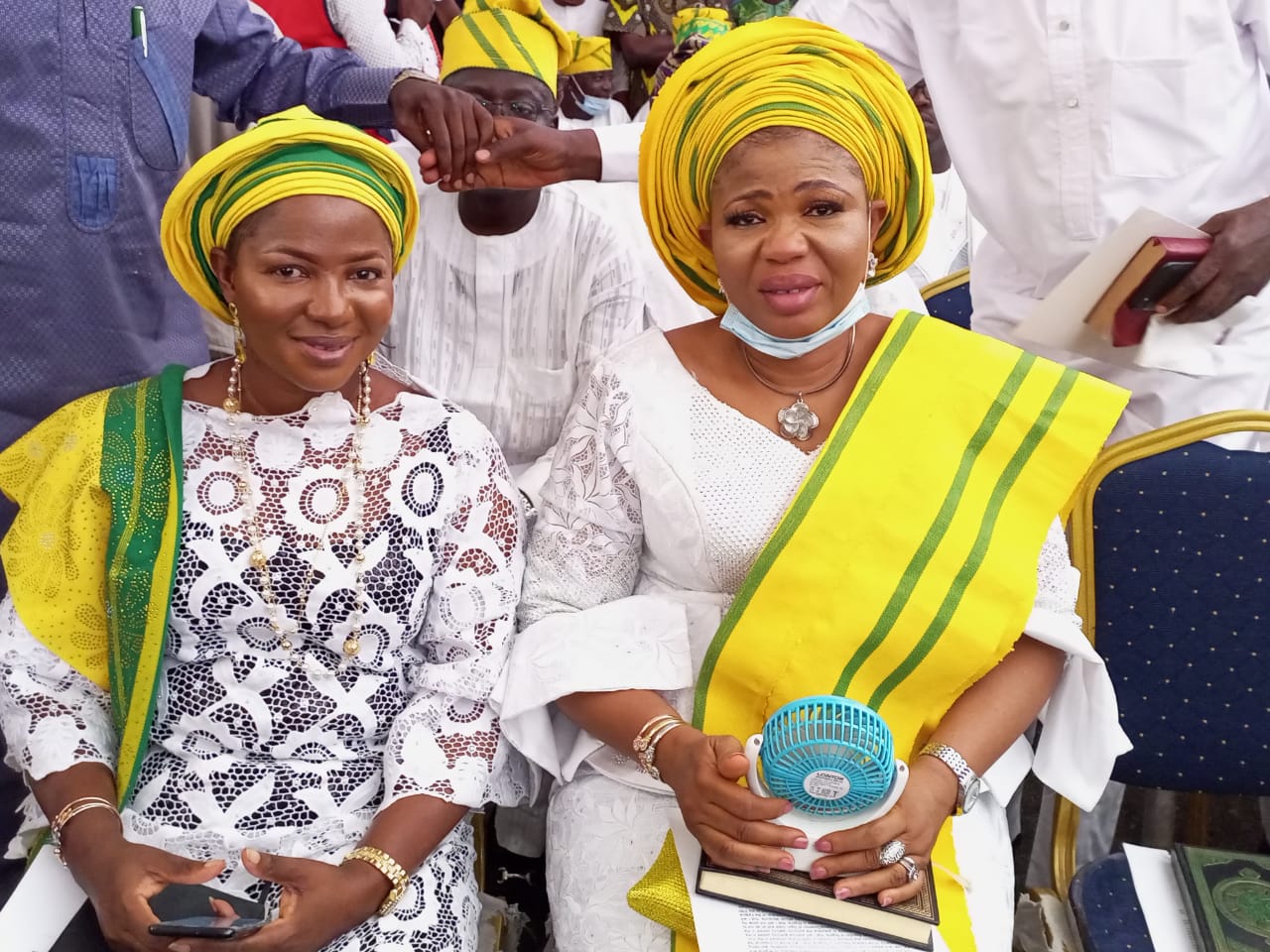 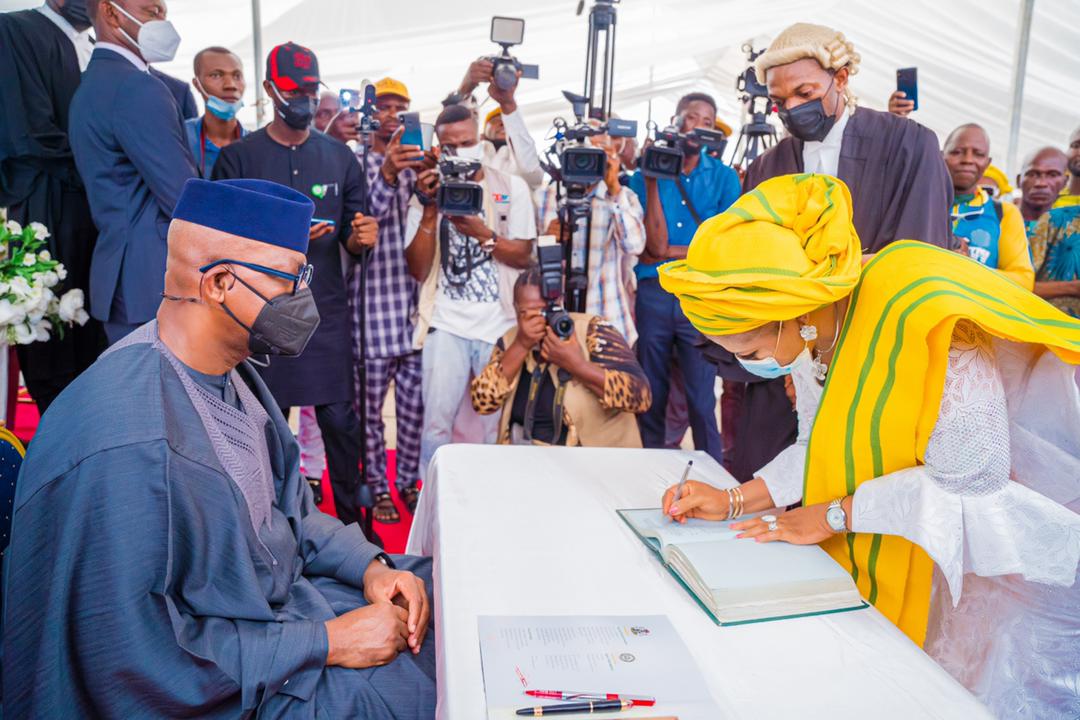 Governor Abiodun also charged them to bring a new vista of development to their various council areas, adding that they should be ingenue in their policies towards bringing the desired change and development to the grassroots.

Oguninsight.com recalled that local government elections were held on Saturday in the state, with All Progressives Congress (APC) winning all the 20 Chairmanship seats.

“I commend you for stepping out to make yourselves available for service and most especially, for the entrenchment of good governance at the grassroots level”.

“In addition, you must also appreciate the fact that your victory at the polls is multi-dimensional. It is a combination of the confidence reposed in your individual abilities; the faith the people have reposed in our great party, the All Progressive Congress (APC) to provide the needed development and ensure individual prosperity for our people at the grassroots. It is a call to service”, Abiodun said.

“From the onset, therefore, it is important that you appreciate the enormity of the responsibility your victory places on your shoulders. The Local Government is not just a tier of government stated in our country’s 1999 constitution, as amended; it is the closest to the people and so much is expected from you. Therefore, your assumption of office must bring a new vista of development to our people at the grassroots”.

“You must also understand that you cannot rely exclusively on allocations from the Federal Government. You will have to be creative in generating funds internally and incorporate the Public-Private-Partnership (PPP) model. But in doing this, you cannot afford to over-burden the people who are the essence and facilitators of your being in power”.

“You should take a cue from our approach at the State level by being cerebral; methodical; systemic and ensure strategic allocation of funds. Let me assure you all that our Administration at the State level, will continue to support our LGAs with funds where and when necessary”.

“Our Administration will continue to formulate policies and implement programmes that are people-friendly. We expect you to replicate same at your level. All these will further bring to fruition the successful implementation of the “Building our Future Together” Agenda. I expect that you will take a cue from us and implement your own Local Government brand of I.S.E.Y.A.”

“I want to assure you that our administration will continue to respect the autonomy of the local governments and give you the necessary support to carry out your constitutional responsibilities”.

Governor Abiodun called on the people of the State, particularly those at the grassroots to hold all the Council Chairmen accountable.

“You have voted them in. You should also ensure that you continue to give them suggestions on how to improve the lots of the people in their areas. We must understand that the democratic process does not end at electing representatives, but also in helping them to do what we have elected them to do. Democracy is not an event, it is a process”.

Meanwhile, the State chapter of the Youth League of the All Progressives Congress, (APC) has charged the newly sworn-in Chairmen in the state to ensure adequate youth representation in their administration.

The League made the call in a statement issued in Abeokuta and signed by its Coordinator, Olamide Lawal, and Publicity Secretary, Adewale Adeleye.

It urged the council bosses to emulate Governor Dapo Abiodun’s style of leadership by making the youth constituency a topmost priority as they begin to form their cabinets, pointing out that the youths in the Gateway State are tools that could be used to fast-track the desired grassroots development due to their resilience and energy.

The statement added, “the youths in Ogun State are very hardworking. Their firmness and strength cannot be underestimated, especially as exhibited in the last pre-election and electioneering exercise just concluded.”

“There is no better time for youths to be compensated for their steadfastness than now. Their resourcefulness and dedication to the party is immeasurable”

“Many of them vied for Councillorship and Chairmanship seats but were denied by the party, yet remained and worked tirelessly for their co-aspirants. There is no better name to call this action than partymanship.”

The League, while commending Governor Abiodun for his ‘inclusion’ style of leadership, stated “indeed, royalty and leadership flow in his blood. He has shown genuine leadership by example and had earned more honour for himself by personally visiting all local government areas, to see things by himself, feel people’s pulses and solicit further support in order to deliver democratic dividends appropriately”.

What makes eNaira different from money in your bank account

Naomi Osaka says she has ‘that itch’ to return to tennis...

Annie Idibia: I’ve been through hell from a very young age

ABOUT US
News world prime is your news, entertainment, music fashion website. We provide you with the latest breaking news and videos straight from the entertainment industry.
Contact us: contact@newsworldprime.com.ng
FOLLOW US
© Developed by Timothy Odedina
MORE STORIES